Difference between revisions of "Phenobarbital for Alcohol Withdrawal"

Phenobarbital is a non-competitive gamma-Aminobutyric acid (GABA) agonist which is an equally effective and safe alternative to benzodiazepines (BZD) for the treatment of alcohol withdrawal syndrome (AWS).[1] Though its use for AWS has waned and consequently many clinicians are now unfamiliar with this regimen, PB has both mechanistic and pharmacokinetic properties which make it more suitable for outpatient monotherapy than BZD.

IV/IM titrated PB is the first-line outpatient medication used for treatment of AWS at the Yukon-Kuskokwim Delta Regional Hospital. Its use is favored because substantial experience at this institution has shown that it is effective, it minimizes return visits, and it eliminates the need to dispense abuse-prone medications (i.e. BZD) to abuse-prone patients while in the midst of a substance abuse crisis. Indeed, minimizing high-risk dispensing of abuse-prone medication is important for improving the health of our community.

The treatment of AWS with phenobarbital (or barbiturates in general) is not new, but it has fallen so out of favor that many clinicians are unfamiliar with this use. However, there is ample published evidence, both old and new, indicating that phenobarbital is at least equally safe and effective compared with benzodiazepines.

Patients’ individual medication requirements are unpredictable. Therefore no standard PB dose is expected to be effective for all patients. Rather, an initial IV (or IM) PB dose of 260 mg is given, and then every 30 minutes (or 60 minutes for IM) an additional 130mg are given until the desired effect is achieved. Using this regimen, many patients will require repeat doses, but none should end up “sedated.”

Alcohol withdrawal is a hyper-alert and/or hyper-autonomic state. The goal of outpatient treatment of alcohol withdrawal is normalization of alertness (i.e. level of consciousness) and autonomic function, not sedation. If a sedative level of [any] medication is required for AWS symptom control, then admission is indicated.

When patients’ hyper-alert/hyper-autonomic state is normalized, many will lightly nap. But such patients easily awaken to voice or light touch and they easily meet all discharge criteria. Rather than being “sedated,” such patients are merely exhibiting the normal physiologic response in the absence of discomfort to a 24-48 hour sleep deficit (which is the norm for patients in this situation). Any concern for sedation can usually be answered by asking oneself if the patient’s post-treatment behavior would be considered abnormal for a patient in the ED with a normal mental status, with a substantial sleep deficit, whose discomfort had been relieved. If the answer is “no”, then the patient is not “sedated,” but rather has been returned to a normal level of alertness.

A subset of AWS patients will present as soon as 12 hours after alcohol cessation with classic withdrawal hallucinations but without any signs of hyper-alertness, clouding of consciousness, confusion, or autonomic hyper-stimulation. This is a well documented variant of AWS, and it should be neither under-treated (i.e. dismissed as fake) nor over-treated (i.e. managed as delirium tremens). Hallucinations are one of the many manifestations of AWS, and they can occur in isolation or combination with other signs. The presence of hallucinations does not change management, and is not and indication for anti-psychotic medication. Hallucinations usually resolve after one or two doses of PB.

In pharmacokinetic studies of rapid IV PB boluses, on average, PB reaches 90% of peak brain concentration by 19 minutes, 95% by 22 minutes, and 100% by 30 minutes.[2] Yet clinical judgment must still be used. At 30 minutes after a PB dose, if the patient has “almost” complete symptom relief, the clinician should appreciate the possibility of a small amount of biological variability and consider reevaluating after another 10 minutes, as it is possible that a small additional effect may become apparent. But if the dose is clearly inadequate at 30 minutes, further waiting is very unlikely to reveal any substantial further effect.

Post-infusion nystagmus/ataxia occasionally occurs. Both experience and published reports reveal that this resolves spontaneously in 15-30 minutes. Given PB's exceptionally long half-life, this seems to be attributable to the rapidity of the drug level increase rather than the level itself. After resolution, this is not a contraindication for more PB, but further doses should be infused much more slowly (such as over 30-45 minutes). Importantly, this is not an allergic reaction nor a reaction which warrants a chart alert. This reaction can be thought of as similar to the "red man" effect of vancomycin: it merely requires adjustment of the administration speed and possibly the dosing interval. This effect occurs more frequently when infusing larger doses (such as 390mg or 520mg) over five minutes; such larger doses (such as in a patient with a well-established dose requirement) should be infused over 30-45 minutes.

Evidence of Effectiveness and Safety

62 patients received IV PB loading dose in the emergency department. The protocol was an initial 260mg which was followed by 130mg increments, but the dosing interval is unclear. The mean loading dose was 598 mg (8.4 mg/kg) and the subsequent mean serum PB level was 13.9 mcg/mL. Four patients experienced minor, self-limited adverse reactions (asymptomatic hypotension, ataxia, or lethargy) which resolved without intervention. All patients were discharged from the ED and none returned for further care during the following week.

44 ED patients were randomized (25 to IV-PB, 19 to LZ). PB patients received a 230 mg initial dose followed by 130mg subsequent doses (dosing interval was "at the discretion of the treating physician"). Mean PB dose was 509 mg (range 260-910 mg); mean number of doses was 2.9 (range 1-6). There were no outcome differences at 48 hours, and importantly, there was no significant difference in length of ED stay (267 min for PB versus 256 min for LZ). Fewer PB patients required admission (12 vs. 16). The authors concluded that "phenobarbital and LZ were similarly effective in the treatment of mild/moderate alcohol withdrawal in the ED and at 48 hours."

300 ED patients: 100 received IV-PB alone, 100 received IV-PB + lorazepam, and 100 received diazepam alone. Initial PB dose was 260mg and subsequent doses were 130mg (dosing interval is not specified). Authors' conclusions: "Incorporating phenobarbital into a benzodiazepine based protocol or as sole agent led to similar rates of ICU admission, length of stay, and need for mechanical ventilation in patients treated for alcohol withdrawal in the emergency department."

PB has long been used for treatment of delirium tremens (DT). Though it has fallen out of favor in most places, a minority of countries and institutions have continued to use it as first line treatment of AWS.

In landmark studies by Kaim and Klett in 1969[11] and 1972,[12] both BBTs and BZDs were shown to be equally effective in treatment of AWS. Both of these drug classes had been previously known to exhibit cross dependance with each other as well as alcohol, and the subsequent discovery that these structurally unrelated compounds are both GABA agonists was critical to understanding the pathophysiology of AWS.

Though BZDs have become the standard of care, this seems mostly attributable to a larger movement away from inpatient treatment and toward outpatient treatment with oral medications. Dispensing BZDs to patients is clearly safer than dispensing PB/BBTs. Yet when the dose is titrated to effect by a physician and patients are not dispensed medication, there is ample evidence that PB is equally safe and effective compared to BZD.

Numerous articles advise caution with regard to PB by alluding to concerns about respiratory depression, but no evidence of adverse effects is ever presented or cited. Therefore these concerns seem to originate more from the authors' lack of familiarity with the use of IV-PB in this setting than from documented outcomes. However, it must be pointed out that PB should never be dispensed to a patient for symptom-triggered dosing, as this would present an extreme risk of unintentional lethal overdose. PB use for AWS must be limited to titrating the dose to the desired effect, and then discharging the patient without additional medication. There have been no reports of iatrogenic overdoses using this protocol, and the drug packaging is a strong mitigating factor to prevent drug errors: PB is only available in 130mg vials. Therefore the initial dose is two vials and the subsequent doses are one vial. A dangerous overdose (i.e. one yielding respiratory depression) would require accidentally drawing up 10-20 vials, which would be very labor intensive and very likely produce questions prior to administration.

The following are the important properties of PB with regard to outpatient treatment of AWS.

Both 2 and 3 indicate a potential synergistic effect when co-administered with BZDs. Studies have shown that dual therapy is superior to either PB or BZDs alone,(insert refs) indicating at least an additive effect.
Glutamate antagonist
The binding of glutamate to its receptor stimulates nerve depolarization. At sub-sedative doses PB/BBTs also inhibit the AMPA subtype of glutamate receptors; however, PB/BBT do not effect the NMDA subtype.[14] This glutamate antagonism is an anti-convulsive effect which is separate from PB's GABAergic effect.[15]

Volume of distribution is X(ref).

Plasma protein binding has been estimated as X percent, predominantly to albumin.(ref)

Young (1987)[6] compared infused PB doses to post-infusion serum PB concentrations in adults presenting to the ED for AWS, and reported that the serum PB level rose 1.65 μg/mL for each mg/kg of PB infused. Though no standard deviation is reported, the similarity of outcomes in different subgroups (including those with alcoholic liver disease) is indicative of very minimal variability of the final serum concentration versus the infused dose (see Table-1).

Following rapid bolus injection in adults, PB quickly distributes in the blood, achieving peak venous concentration at about 3 minutes and settling into a relatively steady concentration by 5 minutes.[16] 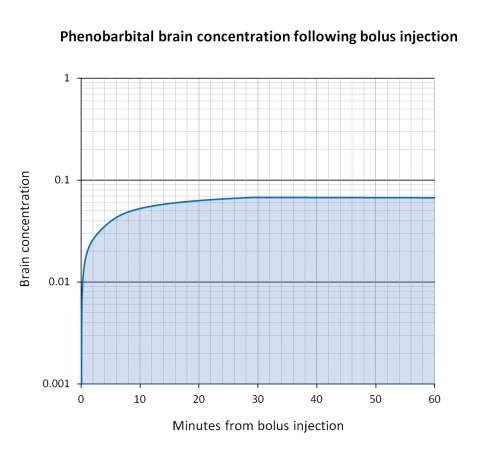 Fig-1. Adult phenobarbital brain concentration versus time after a rapid bolus injection. Y-axis is fractional concentration compared to the initial serum concentration (which has been removed for clarity). Adapted from Fig-3 of Paulson 1982[2]

Figure-2 is a nomagram illustrating the expected serum PB levels based on infusion dose (in mg/kg) and it also shows expected effects at particular concentrations as well as the dose ranges reported in applicable studies. 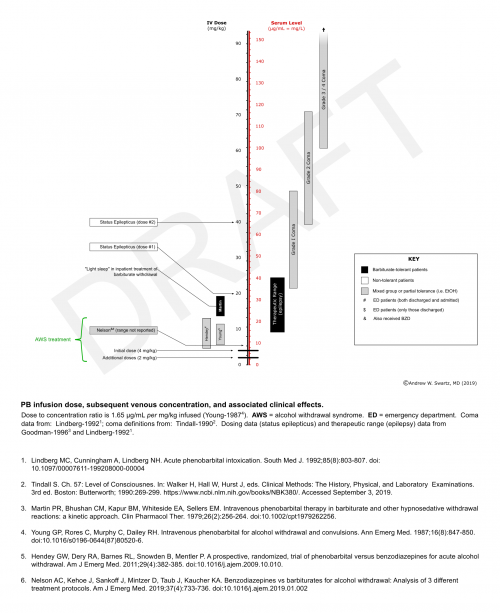 Half-life[20]
The half-life of PB is frequently reported as 100 hours or as 80-120 hours. This is an accurate generalization, but the generalization hides the variation among different populations.